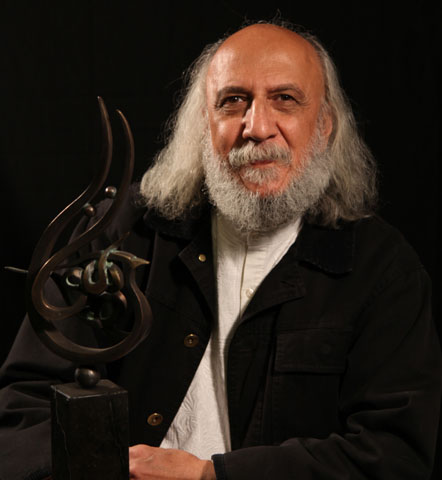 get in touch
Exhibition List
Book: Birds Of Taha
Articles

Taha behbahani, painter, sculptor, set designer, television and theatre director and A university professor was born in 1948 in Tehran.

As a child he was taught how to paint by his father and later became a distinguished Student of master Ali Akbar Najmabadi (one of kamal - ol - Molk's students) at the age of thirteen. He went through his high school education and Kamal-ol-Molk Art school simultaneously and then entered the Dramatic Art faculty and graduated in set design for theater, television and cinema. Later in Paris and Salzburg he started to study and research in the field of Marionette Theater and its connections to the painting and sculpture of the east.

Warning: Invalid argument supplied for foreach() in /home/tahabeh/domains/tahabehbahani.com/public_html/site/biography_view.php on line 49

Upon his return to Iran , he started teaching at the faculty of Dramatic arts and for some years was the director of Marionette theater Department of this faculty. During this period, He directed over 450 educational television programs and two plays for the Festival of Arts Shiraz, Perspolis. He also designed the sets for famous plays such as Hamlet,Macbeth and the Glass Menageries. He has been a member of the executive board of Iran 's National Creative Arts Committee, affiliated with UNESCO and a jury member in a number of international exhibitions. Taha was one of the artists who created a new atmosphere in the painting in 1960's. By presenting his works; he propounded the Metaphysical Surrealistic School in painting. He has participated in 40 different exhibitions as a solo artist or as a member of a group of artists in Iran and abroad. Among them are his exhibitions in Paris in 1993 and 1994, and his exhibition in Venezuela in 1999.Since 2001, he has participated in many group exhibitions in the United States of America . The works of this creative, diligent and keen artist are collected in Iran , France , Germany , Japan, the Netherlands , and the Unites states of America .